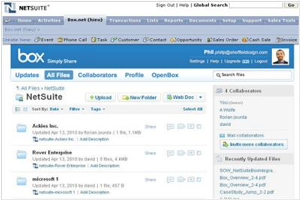 NetSuite is one of the many names competing with Microsoft Dynamics for a share of the ERP community. A media battle has begun between the two companies where each one is attempting to gather customers from competitors. So is one better than the other? As you might expect we think that one is but are going to go over that for you today. After all without proper competition none of these programs would be anywhere near as good as they have become. It is what drives innovation.

While the MSD system is quite easy to use the main area in which they are competing is usability. They claim that pretty much anyone of any level can use NetSuite without any sort of real training. This point is debatable at best and a lie at worst. Both companies do attempt to improve the user interface over time though as none of them are perfect. That being said most systems of this type have an excellent setup at base.

Accounting software for non profit organizations is another area where the two compete. Both of them have popular packages but Microsoft Dynamics may actually come out as the more affordable solution in this particular area.

Cloud competition is another reason that people are making the switch. Some versions of MSD actually use a client-server method which some see as antiquated. That being said all the new versions of the programs will solve this by adding some form of cloud functionality. Therefore everyone is going to be on a level playing field either this year or by the next. So keep that in mind when choosing between the two.

Generalizations are another area in which the two companies are fighting with each other. Both claim that neither one offers proper real-time reporting. Both require updates and are too slow. As for the validity of these claims there isn’t much to them. Microsoft Dynamics has many options for real-time reporting. In fact that is one of the major points which they push forward in their advertising campaigns. Unfortunately in the world of marketing it has become very easy to push forward claims that do not make much sense.

If you are looking for a single view of all sectors it is possible to get it with both of these. However Microsoft Dynamics gathers far more information than NetSuite because it is a highly-developed framework which continues to improve over the years. Instead of a recent contender that is still improving over time. Maybe in a few years it will be a decent contender but for now it cannot keep up with the powerhouses in the industry.

That does not mean this competition is a bad thing. In fact both of the programs are better off for the fact that they are fighting for the same customer base. It means that each year they have to improve in order to fight off competition. Therefore you, the consumer, get the best version of each that you possibly can. If a single weakness is found you can rest assured that someone is working to fix it so that they can remain on top of the industry.